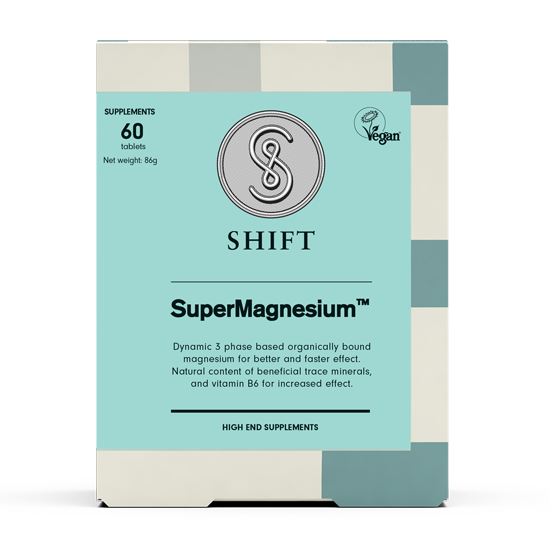 SuperMagnesium is a new generation magnesium supplement, which differs from traditional magnesium supplements in that the body absorbs it easier and quicker, providing a better effect at a lower dose. It has higher bioavailability, as it also includes trace elements, and is fortified with vitamin B6, which helps it achieve a better absorption in the body’s cells.her magnesium compounds.

In order for the body to have a maximal absorption of magnesium, SuperMagnesium contains three different compounds in which together ensure maximum and quick absorption in the body.  The company Mineral Resources International harvest natural minerals from the Great Salt Lake in the United States through a unique process where water is sundried in big pools, at the same time as unwanted sodium is removed.  This is a completely natural process that takes place in the course of about two years.  The end product is a highly concentrated, mineral-rich fluid which contains large amounts of magnesium, as well as 70 important trace minerals that our body needs.  This form of magnesium is easily absorbed and tolerated and has high bio-availability.  It cannot be manufactured in a laboratory, but is 100 percent natural, just as nature has made it since the beginning of time.

In order to achieve maximum absorption of magnesium, the natural magnesium compound from the Great Salt Lake and DiMagnesium Melate are combined with magnesium gluconate, which is absorbed through an active absorption system for dipeptides. Magnesium gluconate is a chelate where two amino acids are attached to a magnesium atom in such a way that the body absorbs it as a dipeptide. A dipeptide is a split protein that is absorbed quickly and actively in the intestine. It is also quickly available in the bloodstream. When taking SuperMagnesium, the body will recognize the dipeptide, which is absorbed through the intestine wall, and the magnesium gets a free ride. On the inside of the intestine wall the magnesium atom is released and ready for use. The magnesium is utilized more efficiently, you get an optimal absorption and stomach problems are avoided.

Vitamin B6 is added to ensure that the magnesium is maximally bio-available for the cells in the body. It works as an important co-factor so that the organism can utilize the magnesium. The two patented compounds – DiMagnesium Malate and magnesium gluconate – are absorbed and utilized 2-5 times more efficiently than traditional magnesium compounds. Albion Laboratories is the only manufacturer in the world that has scientific documentation showing that their chelates actually work in the abovementioned way.