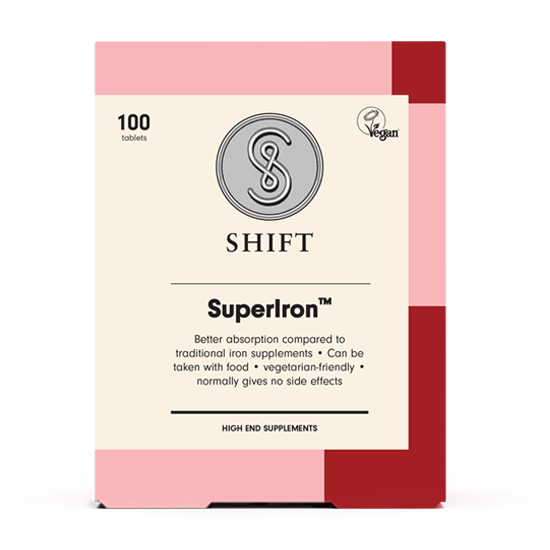 SuperIron is up to four times more absorbable and bioavailable than conventional iron supplements. SuperIron may be taken with meals and all types of food without reducing its effect. SuperIron is suitable for everyone and has no animal content. SuperIron does not normally cause undesirable side effects such as constipation or loose stools.

The iron chelate in SuperIron is called Ferrochel, a special iron compound produced by the US corporation Albion Laboratories, Inc. using a patented process. Ferrochel iron is characterised by its excellent bioavailability, which means that the body can absorb and use the iron for maximum effect. Iron is usually very hard to absorb, and can often cause undesirable side effects such as constipation or diarrhoea.

Ferrochel is a stable iron compound that is little affected by acid/base conditions in the stomach and intestine. It is only after the iron is absorbed by the intestine, that the iron is released and ready to be utilized by the body. This avoids free iron in the gut, which may otherwise cause diarrhoea or reduced absorption of iron and other minerals. The iron atom is bonded with two amino acids (packaged so that they form a dipeptide). A dipeptide bond of minerals with amino acids allows minerals in this form to be “smuggled” through the intestinal wall and into the organism by using the special transport system for amino acids. For this to work as intended, it is crucial for the dipeptide to have the right stability so that the iron atom is released after it has crossed through the intestinal wall. It is also important that the dipeptide is not too large to allow it to pass through the intestinal wall in order to become available to the organism.

Iron deficiency causes generalised symptoms such as tiredness, weakness, fatigue, pale skin and pale mucous membranes. Severe deficiency also causes a fast pulse rate and, ultimately, heart failure. Before taking an iron supplement, it is wise to ask your doctor to check your iron stores (serum ferritin level). This will be a reliable indication of whether you need to boost your iron level.

ABSORPTION AND SIDE EFFECTS:

Ordinary iron supplements are not easily absorbed and are therefore given in high doses, which often cause discomfort in the form of constipation, or for some, loose stools. Due to its high bioavailability, SuperIron can be given in lower doses to minimise the risk of side effects. But even at high doses, side effects such as constipation or loose stools are rare because the iron atom is “packaged” inside two amino acids, and the iron atom is not released until after it is absorbed in the organism.

High doses of iron may interfere with the uptake of other minerals such as zinc, copper, manganese and selenium. This process takes place mainly in the intestines and does not apply to SuperIron because the mineral involved has no ionic charge, but is “smuggled” in as amino acids, after which the iron is released.