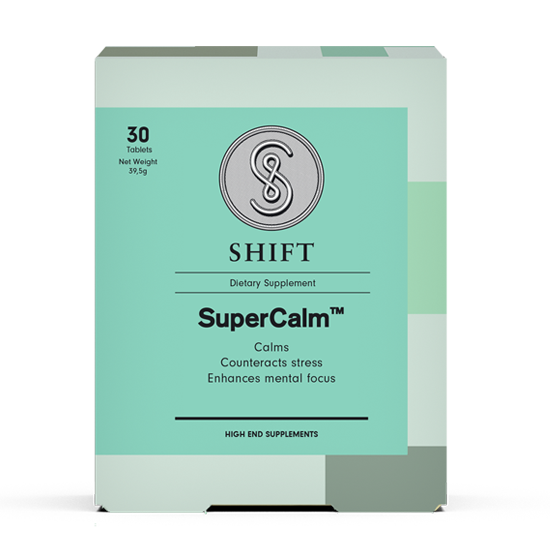 Stress, inner turmoil and mild depression are one of the main struggles in modern society. Stress related to problems at work or at home has become a part of daily life for most of us. SuperCalm has been developed with this goal to tackle those issues in mind. It is a supplement you can take to help you deal with stress, calm you down and sharpen your mind to help you concentrate more.

When developing supercalm, we aimed to create a product that both helps you deal with stress and counteracts sadness and mild depression. We have developed a combination of four potent biological plant-based materials: the mushroom Reishi and three herbs – Saffron, Lemon Balm and Mucuna Pruriens. Individually, these substances have properties that contribute towards a combined effect; helping deal with stress, calming the mind and stimulating the mood. They can also have a positive effect on concentration and memory. All the extracts used are standardized so that SuperCalm will provide the same positive benefits time after time.

Red reishi (ganoderma lucidum) is known as the queen of medicinal mushrooms in China and Japan, and is one of the most popular mushrooms within folk medicine in this part of the world.

Reishi is an adaptogen mushroom that restores the body’s different functions when these have become imbalanced. It can revitalize and sooth, depending on what the body needs. Reishi is particularly effective in combating stress, insomnia and hormonal changes. This is a potent, concentrated extract that has been standardized with 30% polysaccharides.

Lemon balm was traditionally used in folk medicine as a calming agent, and for different types of digestive complaints. It was also believed that regular use of lemon balm would promote a long life. Nowadays, lemon balm is mostly known as a relaxant and as a boost to help counteract anxiety, mild depression, restlessness, irritability and insomnia. With supercalm, we make use of a standardized extract of lemon balm in order to achieve an optimal and predictable effect.

The saffron we use is saffr’activ®, saffron extract (crocus sativus red stigmas), a highly concentrated extract that is standardized and based on the two active substances, crocin and safranal. A double, blind clinical study has been carried out involving this ingredient and covering a number of factors related to stress, nervousness and mood. The participants in the clinical study who received the active preparation, i.e. The same dose as in SuperCalm, reported that they were less affected by stress, were less anxious and generally felt in a better mood.

Mucuna pruriens has a long history within folk medicine, particularly within the ayurvedic traditions, the world’s oldest medicinal system and still actively practiced. In ayurveda, Mucuna Pruriens is known to have a number of positive properties for several symptoms, including nervousness and tension. It is also believed to be a potent aphrodisiac for both women and men.

Mucuna also contains an ingredient known as l-dopa, thought to be the most active substance in mucuna pruriens. L-dopa is a direct precursor to dopamine and is converted to dopamine in the brain, creating some of the substance’s positive effect. Dopamine is a signal substance, i.E. A substance that transfers chemical signals from one nerve cell to another. Signal substances are formed naturally in the brain, are very important and stimulate the brain’s reward and motivational system. Dopamine is secreted in the brain and is related to the feeling of pleasure and satisfaction as it reinforces the intensity of nerve impulses. If our needs are satisfied, the brain responds with a feeling of calm and relaxation.