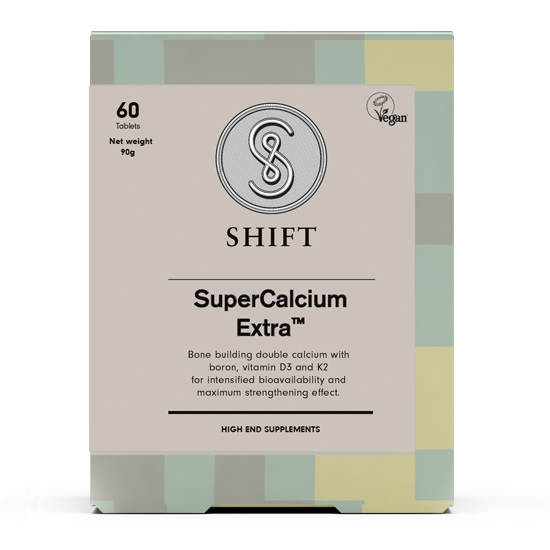 SuperCalcium Extra is composed of several active substances to build bone mass and strengthen the skeleton for a long, strong life.

THE IMPORTANCE OF CALCIUM FOR THE HUMAN BODY

The human body consists of 206 bones, and as many as 270 when a baby. It usually takes around 20 years for the skeleton to achieve full development. All the bones in our body are under constant construction and deterioration. The entire skeleton is replaced about every 7 years.

Bone consists of a hard outer shell and a sponge-like interior which we call bone tissue or bone mass. A skeleton normally attains its maximum strength in the middle of a person’s twenties. This means that the bone tissue is at its densest and most compact before it slowly gets weaker as we grow older. During and after menopause, bone loss in women often increases significantly due to the cessation of oestrogen production. If bone tissue is weakened by more than 25%, it is defined as osteoporosis.

99% of the body’s calcium is found in bone tissue and it is the single most important building material for developing and maintaining strong bone structure.

We use two different types of calcium which are absorbed from the intestine through separate absorption systems. This means that they do not compete with each other for absorption and there is far greater absorption and utilisation of the calcium as a result. Both are developed and patented by Albion Advanced Nutrition in the US.

DimaCal is developed and patented by Albion in the US. It consists of two calcium atoms that are bound to a malic acid molecule. The result is a particularly effective calcium compound with excellent absorption properties. Studies have shown that DimaCal does not produce gas in the intestine, which can be a problem for a number of other calcium compounds. DimaCal is absorbed through the normal channel for minerals in the intestine, where the bond between the calcium atoms and the malic acid molecules is easily dissolved. This results in the calcium being ionised, which means that it becomes electrically charged. It is then absorbed through the intestinal wall. This is a so-called passive absorption channel, and is the normal way in which minerals are absorbed. The malic acid molecule to which the calcium is bound also has a function since it supports the production of energy in body cells.

Bisglycinate Chelate is a calcium atom bound to two amino-acids in such a way that they form a so-called dipeptide. The dipeptide is easily sucked through the intestinal wall and the mineral accompanies it as a kind of free passenger. The chelate is absorbed intact without it being released into the intestine. This only happens after it has passed through the intestinal wall. Smuggling the calcium into the body in this fashion results in particularly good absorption. At the same time, the two calcium compounds do not compete with each other for absorption.

Boron is the last mineral in SuperCalcium Extra, and this too is made by Albion in the US. We use boric acid bound to the amino-acid, glycine, in order to achieve better absorption from the intestine.

Vitamin K2 can be produced both naturally and synthetically. We believe natural production is the better alternative. For this reason, we use NattoPharma’s recently developed and patented MenaQ7. This has been used in a range of studies and is, without doubt, the best documented variant currently available. Among other features, studies have shown that MenaQ7 had an absorption rate over a period of eight days that was six times better than synthetically produced K2. We use a vegan natural vitamin D3, sourced from hand-picked lichen.